A few years back, i had the great pleasure of owning a Land Rover Defender 90 TD5.

The Defender portrays what Land Rover is all about. It’s the original, instantly recognisable, best 4x4xfar, and when you look at it you can still see the lines inspired from the first series 1’s from 1948. To say i loved this Landy was an understatement.

I was out looking for a replacement for my Vauxhall van when i stumbled across and 02 plated 90 Hardtop Defender at Matford Land Rover in Exeter. They offered me a good price in part exchange for the van, and a deal was struck.

Now, a Defender 90 looks like a big vehicle, and it is – from the outside, but the actual loadspace in the back isn’t as big as you think. Firstly, it wouldn’t fit my skimboard in length ways, or width ways, and the skimboard is only 53 inches in length!

Secondly, it didn’t provide me with a huge place to get changed into my wetsuit after skimming or surfing, and as with all “proper” Land Rovers, the heater didn’t work all that great either, and would take a decade to warm up. Not exactly want you want after a few hours in the sea in the middle of winter.

But, despite it’s shortcomings, i could forgive it anything. It was a Defender, and it was mine – a car i had always wanted to own.

I bought the Defender just before Christmas in 2005, so there was some frantic Landy gift buying going on by my parents to ensure i had some little prezzies to add to the Land Rover on Christmas day. 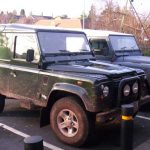 In an attempt to boost heater output, my parents bought me a little scoop that fits on the wing of the Defender. The idea is to get a ram air effect and channel it into the heater intake. It did make a noticable difference to the amount of air flowing through the heater vents, but it would still take forever to warm up!

A few days after Christmas, i set off with my Christmas money to Brookwell’s in Bovey Tracey. There i purchased a steering guard, front & rear QT diff guards, a load space protector and an aluminium checker plate panel for inside the rear door. Suitably satisfied, i spent the next few days fitting the new parts to the Land Rover.

The Defender 90 wasn’t too sluggish either. The TD5 engine is an awesome powerplant, and easily tunable, and during my ownership it returned around 27-30mpg around town, which isn’t bad considering the weight of the vehicle.

I used the Defender for many green laning trips around Devon, as well as surf & skim trips to Cornwall. It never missed a beat, and would take whatever i would throw at it. The Land Rover Defender is a hugely capable vehicle, and it’s a real shame that most Land Rover owners never get to test their vehicles to the full extent.

I had a massive amont of fun in the Defender during my time owning it, but unfortunately event’s conspired against me, and i was forced to sell what was at the time, my favorite Land Rover i had owned.

It would be a few years later that a rival for “favourite landy” would appear on the scene. It appeared in the form of the Land Rover Discovery 2 TD5