I must admit, this was one of my favourite Land Rover’s to date. The other one that was on a par with this was my Defender 90 TD5. Both were awesome vehicles, and when the time came to say goodbye, i was very sorry to see them go.

I had the Discovery 2 for almost a year. It was the commercial version, which was modified by Land Rover Special Vehicles at Solihull. It had no back seats, a full length load bed and metal bulkhead & blacked out windows in the back. It had the fantastic TD5 engine, coupled with an auto gearbox, electric everything, Land Rover alloys, but no air-con. The previous owner had also put on a set of BF Goodrich All Terrain tyres, which helped give the Discovery a purposeful look.

As i knew i was going to need to carry a couple of passengers for a trip to Hossegor in France later in the year, one of the first thing’s i did was set about locating a rear seat to fit in the back. I wanted to retain the full length load bed on one side, so opted to just fit the single rear seat. A quick Ebay search located what i needed, and one morning i drove to Wiltshire to pick the seat up.

The first job was to remove the bulkhead, which was as simple as undoing a few bolts. I then cut a recess for the seat into the loadbed, and located it in position using the seat mounts which are already there. The whole job took a couple of hours, and now i could carry 2 passengers, plus the driver, and still have room for my surfboards and skimboards in the back.

A few months down the line, i sold a Peugeot 106 Rallye that i had for a number of years, and put the money towards a roof tent, as i was going to need sleeping accommodation while in France. 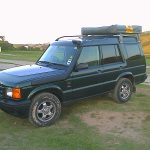 After a lot of research, using the internet, and various Land Rover forums, i settled on a Myway Roof Tent. I had spoken to Paul at Myway UK, and he was one of the most helpful guys i had spoken too.

I chose the 1.4 metre Myway Evolution, made from Oxford Nylon and aluminum to keep it light weight. It was wide enough to sleep 3 people, but not overhang the sides of the Discovery. The roof tent was too big to send through the post, so i had to collect it from Paul’s house in Lincolnshire. So i drove the 6 hours from Devon to collect it, stayed overnight at Paul’s house, and returned the next day.

With the living accomadation sorted, it was time for the snorkel. I chose the Safari Snorkel, and set about fitting it one evening. The job only took a couple of hours, and luckily i had all the tools and hole cutters to hand (thanks Dad) which made fitting it pretty simple. The instructions and templates that come with the Safari snorkel are spot on too. A quality piece of kit. 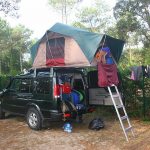 The Disco performed faultlessy on a a 10 day road trip to Hossegor in France for the European skimboarding championships. It was 515 miles from Roscoff to Hossegor, and it ate up the motorway miles in comfort, provided enough room for 3 people, luggage and boards.

Ok, it was a little cramped at times, and tempers frayed (learn to tidy up after yourself Mark! ;) ), but isn’t that what road trip’s are all about?

I was very sorry to see the Disco go, but with fuel prices soaring, and the TD5/auto gearbox combination only giving 22mpg around town (damn those Devon hills!) i had to trade her in!

As i said at the beginning of this post, the Discovery 2 was one of my favorite Land Rovers that i have owned. It’s powerful, comfortable, and looks great. As with all Land Rovers, you have to keep them serviced, and get used to their little niggles here and there, but I would have no problem owning another one. It’s just next time i would opt for the manual gearbox which gives better MPG.