So as I have had the 110 a few months now, I thought I would get an engine oil change done on the Land Rover for peace of mind. I have a 300tdi engine in my Land Rover 110, but this guide can also be used for the 200tdi engine, and both the Defender, and the Discovery.

Its not a very complicated job, but it can be messy, so lets see how its done.

For the 300tdi engine, a 10W/40 or 15W/40 grade oil will be sufficient. I have used 10W/40 semi synthetic oil from Halfords for this oil change. In the past I have used Castrol Magnatec and Mobil 1 in TDI engines with no problems.

The engine takes 6.85 Litres of oil – which means you are going to need 2 bottles of oil as it comes in either 4 or 5 litre cans.

The part number for the Land Rover Tdi oil filter is: ERR3340

Things to bare in mind before starting:

Firstly, park the Land Rover on level ground. This will make sure you get an accurate oil reading on the dipstick.

You don’t have to use engine flush, but on this occasion I did. I bought some to help clean out the insides of the engine and loosen up any dirt and grime. You add this to the engine first (through the oil filler cap), and then run the engine for 15 minutes on a fast idle.

If you don’t use engine flush, its worth running the engine for 15 minutes to warm the oil up, as it will drain better when it is hot. While the engine was running, I sorted out the other things that I would need to do the oil change.

After your 15 minutes are up, switch the engine off.

Now here comes the messy bit, so get those rubber gloves on and position the bowl/container under the Land Rover. Remember the oil will shoot out a good 6-8 inches to begin with, so position the container accordingly.

Use the socket or spanner to undo the sump bolt SLOWLY! After initially getting the sump plug undone with a ratchet, I switch over to a socket on a long extension bar and undo the last bit by hand.

Maintain some pressure on the bolt so it stays in the hole until the last moment. Doing it by hand will allow you to feel when it is at the end of the thread and you can quickly remove it out of the way of the oil stream!

With the sump bolt removed, the oil will pour out rapidly into your bowl or container. As the oil flow slows, you might need to reposition the container to directly underneath the sump hole.

I let the oil continue to drip for about 15 minutes before replacing the sump bolt. Don’t forget to replace the copper sealing washer if necessary.

Reminder – replace the sump bolt! Yes its worth mentioning it twice, you don’t want to be pouring your new expensive oil in the top of the engine only to have it come out the bottom and decorate your driveway! 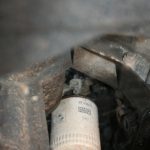 The oil filter is a screw fit, so can usually be undone by hand (usually both hands needed to get it started). On occasions it can be on too tight, and in this case you will need a oil filter strap wrench to remove it.

If you don’t have a strap wrench, then the other way (the messy way!) to do it is to pierce it with a sharp screwdriver and drain off the oil into a container, and then use the screwdriver in the hole as a wrench to undo the filter. 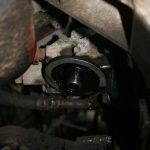 Once removed, you can leave the container in place for a further 10 minutes or so to let the oil drain from the filter housing. If the oil has dripped onto the axle or other components, use a rag to clean it all up! 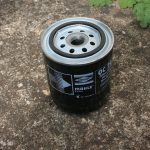 The first thing you need to do is get some of the new clean oil on your finger, and wipe it around the the rubber seal of the new oil filter. This will help create a good seal.

Fitting the new oil filter is as easy as screwing it onto the housing! You want to do it up by hand until the seal makes contact with the housing, and then tighten it up another half turn.

Over-tightening can deform the rubber seal, resulting in leaks! 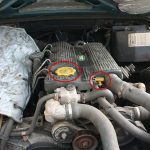 With the new filter in place, and the sump bolt replaced (double check!) you are ready to pour in the new oil through the oil filler in the top of the engine. Remove the big yellow oil filler cap (as shown in the photo on the right) and pour the oil in carefully. Use of a clean funnel will aid things enormously.

We know the engine takes 6.85 litres of oil, so you can safely pour in the 4 or 5 litres from the first bottle of oil. The second bottle of oil should be poured in stages, as you want to keep checking the level of the oil on the dipstick.

Getting an accurate dipstick reading: To get an accurate reading, let the oil settle for a minute or two. Then withdraw the dipstick (circled in the photo) and wipe it clean with a rag. Then replace the dipstick and immediately withdraw it and read the oil level. You are aiming for a level between the “low” and “high” marks. Your dipstick could also be marked up as “min” and “max”. Never overfill – the max reading is there for a reason! 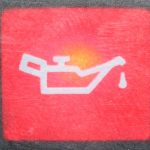 So now you have the right amount of oil in the engine, you are ready to start the engine. Fire up the engine, and make sure the oil pressure light (shown on the right) goes out. It will take a short time to go out as the oil pump fills the new filter.

You can now start the engine again and run it for 10 minutes to check for leaks around the sump bolt and oil filter. That’s it – job’s a good’un!