My first Land Rover Discovery I picked up in 1999 from Mike Harding Land Rovers in Bovey Tracey, Devon. At the time I didn’t realise the significance of my purchase, it was just a normal G reg Discovery 200Tdi.

This was an awesome car for me, it carried all my surf & mountain biking gear, was economical, had plenty of power and would cruise comfortably at 70mph on the motorway.

It gave me no problems whatsoever, and twice took me to the French Alps, where it just ate up the motorway miles through France.

So what was it that was so special about this car that it made me keep it for over 7 years?

You may be wondering what a GWAC is, well it relates to the registration plate on the car: G640 WAC.

You see, Land Rover registered a number of pre-production and early production Discovery’s for use as press demonstrators at the Discovery launch in 1989. All these vehicles were registered with G*** WAC plates. Even the Camel Trophy Discovery’s from that year, were also registered on GWAC plates. 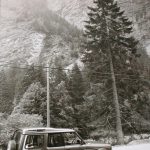 From the 86 press cars only 43 left Land Rover and found new owners. The other 43 were either destroyed in testing and development or simply scrapped by Land Rover. Some were kept on as company “hacks” until they either broke or were replaced by newer cars. So that eliminated 43 of them, leaving 43 in private ownership.

So what this meant for me, is that my car was one of the very earliest Discovery examples, which of course meant I cared for it a lot more than I would normally do!

It was serviced more often, rust was treated early, the chassis was waxoyled, interior kept clean etc. Basically anything that needed doing to this car was done.

It was this vehicle which really started my love affair with the Land Rover Discovery. It combined car like comfort with go anywhere ability, and suited my needs down to the ground.

I was sorry to see my GWAC go, and I still wish now that I had kept it, because of what it is: one the 1st ever Land Rover Discoverys to come off the production line.