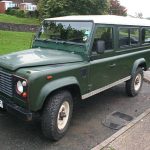 Last week I explained where I have been over the summer period, and that I was looking for a new Land Rover 110.

I must admit I wasn’t expecting to have to write this post so soon, but I managed to sell my Mitsubishi Delica within 24 hours of listing it on eBay – which left me without a car.

The hunt then started in earnest for another Land Rover 110. I scoured all the usual places; eBay, Autotrader, Desperate Seller etc, but to no avail – the 110’s that were coming up were either too far away to go and view, or were out of my price range.

I had viewed a 110 at a local car dealer, but it had “new” underseal sprayed all around the chassis, which could have been hiding a whole lot of trouble. As it was, half the bulkhead outrigger was missing – so I dismissed this one in a few minutes.

I had also spotted another local 110, but it was fitted with a Nissan 6 cylinder diesel engine, which wasn’t really what I was after. I wanted an original 200tdi engined 110.

The weekend came and went, still not a lot was coming up on the searches. So Monday morning I decided I will check out this Nissan engined 110. As I went to find the details on Autotrader, another 110 popped up that wasn’t listed just a few hours earlier.

It seemed to fit the bill: 1993 Land Rover 110 200tdi hardtop with side windows. It had recently had a replacement engine and heavy duty clutch fitted, and was up for £2500.

I immediately called the seller, who informed me he had only listed the Landy an hour earlier. I arranged a time to meet him that day and drove up to Taunton to view it.

When i turned up, the Landy was a little tatty around the edges. It had been carpeted in the rear and on the inside of the roof – both to a high standard – but it was full of dog hairs though!

The chassis was in good condition, and the rear crossmember had been replaced in the last few years. There was rust present in the footwells and the usual bulkhead places.

The engine started first time, and pulled well with only a little bit of smoke on start up. It had some service history, and old mot’s going back until 2002. The receipt was present for the engine replacement in June 2009.

After a bit of haggling we agreed on £2350, and he let me have the full tank of fuel that he had put in a few hours earlier.

So there we have it – I have returned to the Land Rover fold, and the 110 is going to be my daily drive, and provide some more articles for this website.