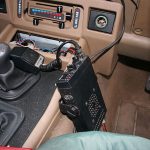 CB Radio (or Citizens Band Radio) was deregulated in 2006, which means you no longer need a licence to operate one. Because of this the numbers of CB’ers have started to rise again since 2006, especially amongst 4×4 owners.

Many 4×4 owners choose to fit a CB to their car, as its a very quick means of communicating between groups of vehicles. There’s no need to know everybody’s mobile numbers, no costs involved (other than the purchase of the CB & aerial set-up – around £70) and the message can broadcast across the group in seconds. It’s also very social when travelling in a convoy/group.

It’s also not illegal to talk on a CB microphone whilst driving (unlike a mobile phone), but I wouldn’t like to be the one to tell a traffic officer this if they did happen to pull you over.

I have had a CB knocking around since the 1980’s when they were all the rage, and I had it fitted to my Discovery 2, where it proved invaluable when greenlaning with other vehicles. It’s not an all singing all dancing “rig” (slang term for a CB radio), it doesn’t even auto scan the channels, but it works and does what I need it to do!

So with an impending greenlane trip on the cards, i set about fixing the CB into the Discovery. 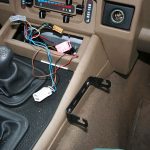 You first have to decide where you are going to mount it. You need easy access to the CB control’s, and the channel indicator. I decided against having it mounted on the dash as it would be in full view of anybody looking through the window, so located it on the centre console, just to the left of the drivers seat.

Once you have decided on your position, then installing the CB mount is as easy as screwing in 2 self tapping screws. (see pic)

Electrical connections are pretty straight forward too, you just need to find a positive feed from the battery, and a negative to ground. As my Disco doesn’t have any radio, I used the positive/negative from the radio to power my CB, with some choc-block doing the trick to connect up the wires. I used a multimeter to check which wires were live and earth (negative), you are looking for a reading of around 12 volts.

Note: My positive feed wire from the CB has an inbuilt fuse, and it’s always wise to make sure that anything electrical fitted to your car has the correct fuse in place should something go wrong!

Now you have your CB mount installed, and it’s wired up, you now have to turn your attention to the aerial and aerial mounting.

Firstly, if you are going to be off-roading or green laning, then you will want a good flexible aerial. I chose the Thunderpole Orbiter – cost around £18.

On a Discovery you have a couple of choices. You can get a mag mount (magnetic mount) which you plonk on the top of your Disco roof (doesn’t work with Land Rover series/Defenders, as they have aluminium roofs), get a mirror mount and attach it to your roof bars, or use a gutter mount. 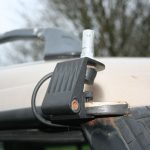 I already had the gutter mount from the previous car, so this is what I have installed with my set up. I was going to mount the aerial on the back gutter, but considering the rust around this area, I decided against it!

So I have mounted it at the front corner, just above the drivers door. I have a quick release aerial, so can remove it through an open window if need be, and the coax (coaxial cable) doesn’t have to run that far to the CB. 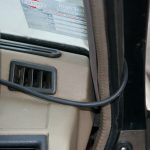 I ran the cable from the gutter mount, down the inside of the door rubber and brought it inside at about the height of the dash. It then runs behind the dash binnacle (where the speedo/rev counter is) and then down the other side, past the cigarette lighter to the CB. It’s all pretty neat and out the way, and easily removable should I need to take it out in the future.

The complete set up

So this is how the completed set up looks: 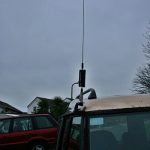 So I am now all set for greenlaning/off roading communication, and some friendly CB banter when out on the road!