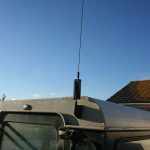 One of the first jobs since getting the Defender 110, was to fit my CB. I have had the CB installed in my Land Rover Discovery before, and had taken it out before I sold the Disco.

The Land Rover Defender (and Series) present their own set of problems when it comes to install a CB, because of the lack of a steel roof to attach an aerial mag-mount to.

Therefore your choices are a mirror mount, gutter mount, or whats called a PSM-1 mount – which is what I have chosen to fit.

This is how I did it. 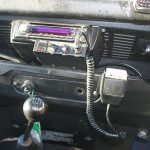 There’s plenty of options on a Land Rover Defender dashboard – so its up to you where you want to position it.

Once you have decided on your position, then installing the CB mount is as easy as screwing in 2 self tapping screws. However, my CB slotted in just under the radio compartment without the need for the mount – so installation was pretty easy – I just needed to find a positive feed and a ground.

I had a hunt around behind the radio using a multimeter to check which of the unused wires were live and earth (negative). Once that was determined I used spade terminals to connect the CB.

Note: My positive feed wire from the CB has an inbuilt fuse, and it’s always wise to make sure that anything electrical fitted to your car has the correct fuse in place should something go wrong! 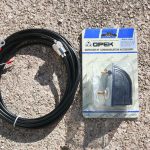 Here is the fun part installing the aerial and aerial mount.

As I mentioned earlier, I have chosen a PSM-1 aerial mount. It is ideally suited to Land Rovers where you can install the aerial at rear of the vehicle. It is a strong and neat solution that keeps the cable connections on the inside of the Land Rover.

To install a PSM-1 aerial mount, you will need:

1: Mark up the outside of the Land Rover where you want to drill your holes. I marked up some masking tape to tell me where to drill. You can use the metal backplate as a guide too.

3: You then need to drill the top hole with a 10mm drill bit. This makes sure it is large enough for the plastic insulator to pass through. 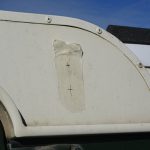 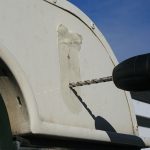 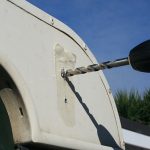 Now you can turn your attention to the inside of the Land Rover.

To make a good earth connection it is necessary to make a good metal to metal contact between the oblong metal plate and the inside panel you are attaching the mount too.

5: Use some sandpaper to take the inside of the panel back to shiny metal. I also had to remove some carpet that a previous owner had glued to the panel. I just cut it with a stanley knife blade. This is shown in the first photo below.

6: Once your have taken the panel back to shiny aluminium, you can trial fit the mount as shown in the second photo below.

7: You can now attach the cable to the mount. The inner cable goes to the top bolt, and the copper braid goes to the bottom bolt which is the earth. Do up both nuts firmly. 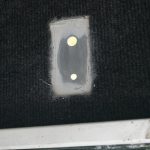 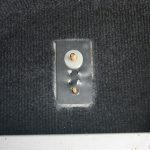 Some people have had problems getting a good ground plane (earth) on their Land Rover Defenders, so following some advice I chose to add an additional wire direct to the chassis of the Land Rover.

I just made up a length of wire with a ring terminal at either end. I attached 1 end to the earthing bolt on the aerial mount, and then run it down the side of the rear door, through a hole in the rear tub and attached it to an existing bolt on the chassis (after taking the chassis area back to bare metal) Heres the photos. 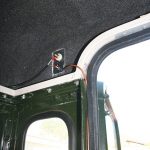 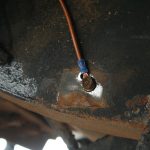 Now your mount is installed, you can run your coax cable along the inside guttering to the front of the Landy. Then drop it down the edge of the windscreen (behind the plastic trim) and then behind the dash. It’s a bit fiddly to remove parts of the dash, but it does make for a neater installation.

Because you are installing your mount onto alumimum, the exposed bare metal is likely to oxidise, so painting over the area around mount on the inside panel with a zinc based paint will do the job well. Remember to do this after you have tuned the aerial.

Fitting and tuning the aerial 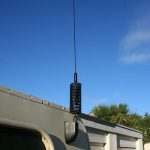 My aerial is a Thunderpole Orbiter which I have had for a number of years – its just gets transferred from vehicle to vehicle.

The aerial had the standard 3/8 thread and it just screws into the PSM-1 mount and is nipped up using a 13mm spanner.

If you have bought an aerial brand new, then there shouldn’t be any need to tune the aerial. I had to tune my own aerial (by adjusting its length) to get a satisfactory SWR reading.

For more information on tuning your aerial and taking SWR readings have a look here: SWR meters and readings explained

So there you have it. How to install a neat PSM-1 aerial mount onto your Land Rover Defender. I am now all set for greenlaning/off roading communication, and some friendly CB banter when out on the road!