I was alerted to my lack of brake lights by my sister a few days ago. I knew they used to work as I towed a trailer a week or two ago for my father, and I checked they were working then, but sometime in-between, the brake lights stopped working! Typical!

So I had to investigate the problem, starting with the easy stuff, the bulbs. When they checked out ok, I checked the wiring to the brake lights – again, this was all ok, so that just left the brake light switch.

After spending some time researching what I had to do, with help on the Series 2 club forums, it became clear that I could change the switch with little or no bleeding required on the brake lines. 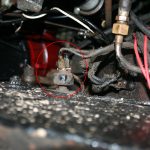 The hydraulic brake light switch is located on top of the right hand side chassis rail (as viewed from the drivers seat).

Its easily accessible from underneath the Land Rover, just shuffle your way under the Landy, just behind the right front wheel. Take a look at the photo on the right – this is what you’re looking for!

Having located the switch, I pulled off the two spade terminals, and shorted them out with a bit of wire and turn on the ignition. Hey presto, the brake lights come on – indicating it was indeed the hydraulic switch that was at fault!

Part number: A new switch only costs about £5 and the part number you need is STC1689 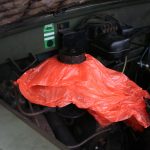 Next up was to take the brake fluid reservoir cap off, and place some plastic over the top and screw the cap back on. (see pic)

As the fluid tries to run out when you remove the switch, the fluid creates a vacuum against the plastic on the cap and should hold the fluid in the pipes (or seriously reduce the amount lost).

In all honesty, cling film would have done the job better than the carrier bag that I used, but I didn’t have any in the house!

Then I proceeded to clean the area around the switch with a stiff brush, as you don’t want dirt getting into the brake pipes when you remove the switch. 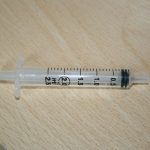 I then used a small syringe to pre-fill the new switch with new brake fluid.

As I unscrewed the old switch and removed it, i placed my thumb over the hole and got my helper (dad!) to pass me the new “pre-filled” brake switch. I then removed my thumb and started to screw the new switch into the brake line.

At the same time, I asked dad to gently apply some pressure to the brake pedal to force some fluid out as I screwed it in. This should have prevented any air from being locked in the system.

Then all that remains to be done is to connect up the two wires and test the brakes. If the brakes feel spongey when testing them, then you will probably need to do a full bleed. 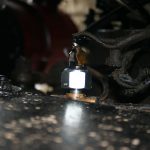 As it was raining when I changed the switch I didn’t do a proper bleed of the system from one of the brakes, but I will probably bleed the fluid through a little in the coming days for peace of mind – and it gets some new fluid through the pipes too.

Tags
brake light brake light switch How To hydraulic land rover series series 2
11th April 2013
0 2,234
Get free Land Rover Blog updates by email
Awesome Land Rover articles and videos straight to your inbox!
We never spam, ever, and you can unsubscribe at anytime!