This was the last job in the series of jobs to fix the slow starting on cold mornings (1: leak off pipes, 2: fuel pump, 3: glow plugs). If it wasn’t this, then I would be left scratching my head as to what the problem could be – so I was pinning my hopes on the plugs being the problem!

So lets get on and explain how I changed the glow plugs.

What do glow plugs do?

If you aren’t sure what glow plugs do, they heat up (glow red hot) on cold starts on a diesel engine. This allows the diesel to explode when it is injected into the cylinder. Diesel needs that initial heat to get it to burn properly.

So the first job I did was to determine if the glow plugs were getting 12volts. If they weren’t then that would indicate a faulty relay (located by the battery, next to the ECU).

Checking the glow plugs is easy with a multimeter. Put the positive probe on the glow plug head, and the negative to earth. Get somebody to switch on the ignition, and take the reading.

In my case, I got 12volts at the glow plugs, which meant my relay was working fine.

You can also check the continuity of the glow plugs with the multimeter too, but having established I have 12 volts at the glow plugs, I knew something was wrong. With 12volts they should be glowing and starting the engine, and they weren’t! 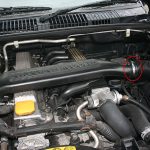 The job is pretty straight forward, but there is the added complication of removing the inlet manifold first, so you can get unhindered access to the plugs.

First job is to remove the plastic air intake over the top of the engine, its only 2 jubilee clips to remove it out of the way.

Next up is the removal of the inlet manifold. The photo on the right highlights some of the nuts which need to be undone to remove it. 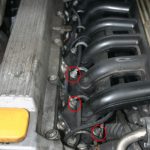 You will also have to to undo the 4 bolts that secure the EGR (if fitted) to the front of the manifold. There are also some electrical wires and fuel line that can be unclipped from the underside of the manifold too.

With all the nuts and bolts undone, you will be able to remove the manifold with some jiggling around! Once removed, it is advised to block up the inlet holes with some rags to stop you dropping nuts/bolts/dirt down into the cylinders! 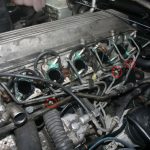 An 8mm socket is required to remove the nut on the top of the glow plugs, and then remove the electrical connector out of the way.

A deep 12mm socket is required to remove the glow plugs from the block. The plugs could be quite tight in the block, but on my Range Rover they came out easily enough. 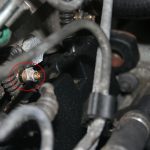 Take your time removing them, as it can get a bit fiddly in places. I dropped a couple of nuts towards the bottom of the engine mount and had to retrieve them with a magnet, so just be aware!

With all the glow plugs removed, you are ready to fit the new ones.

I would advise you buy the best glow plugs you can afford. I have read numerous accounts of people buying cheap glow plugs, and having to change them within 6 months.

I bought Beru glow plugs, as they were original fitments when the engine was made. I got them from my local GSF parts store and paid about £50 for the 6 glow plugs – remember you need 6 – not 4! Other brands of good quality glow plugs include Bosch, NGK, Delphi and Denso. 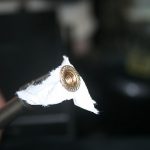 When installing the new plugs, put some anti-seize compound on the threads, as this will help if you need to remove them in the future.

Handy tip: When installing the end nuts to hold the electrical connections in place, use a bit of tissue in the end of the socket to hold the nut in place in the socket. (see pic on right)

Be careful not to over-tighten the electrical end nuts.

With all the new glow plugs installed, and electrical connections fully secure, you can replace the inlet manifold. Fitting it is the reverse of removal.

Plastic manifold: If you have a plastic intake manifold (which indicates you have an EGR valve) then you can usually reuse the rubber o-ring gaskets. If you need to replace them, then they are only a few quid.

Well the following photos show why my Range Rover was slow to start in the mornings. All the glow plugs were shot! Most had cracks in, and 2 of them had disintegrated at the tip.

The following morning, after 5 seconds of “glow” the car started first time on the button. Job done!