Over the past few months the Land Rover has been running around without a heater box. I had to remove it to fix the heater blower motor which was not working due to water coming through the heater intake on the wing. It had been like this since I bought the Land Rover back in June 2013.

Technically the water should have drained out the bottom of the intake, but this had been blocked up, so the water had no where to go apart from into the motor area. While the heater box was removed, I changed the Land Rover heater matrix and also managed to get the old motor working again by stripping it down and cleaning it.

In the last few weeks I have refitted the heater box and bought a new wing top heater intake snow cowl, as shown in the photo above. This completely encloses the heater intake, so rain/snow cannot enter the intake into the motor. The air is drawn from slightly lower down on the wing side.

The Wolf Land Rover’s supplied to the military had these fitted and they were made from aluminium, but in the last few years Land Rover accessory manufacturers have started making them from ABS plastic. The plastic snow cowl is much cheaper at around £30 from various companies on eBay. 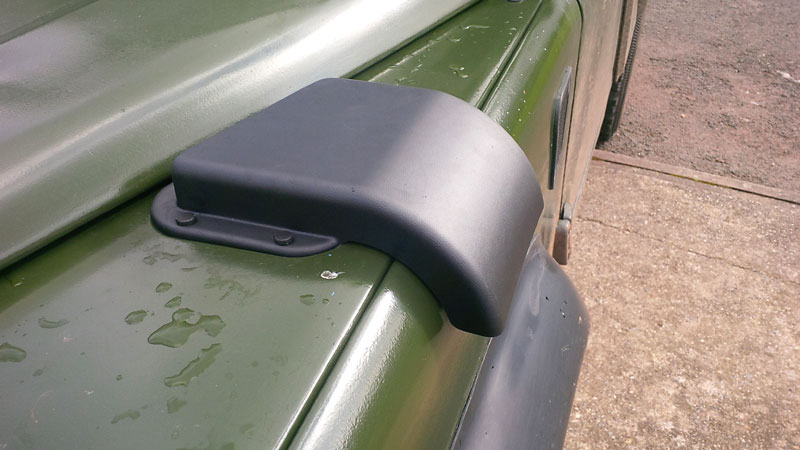 The snow cowl comes complete with longer screws, and all you have to do is unscrew the existing intake screws, place the over over the top and fit the new longer screws – they even supply covers for the screws to make it all neat and tidy! It takes all of about 5 minutes to fit it!

Having taken a drive with the new cover fitted, you do seem to lose some of the “ram air” effect, but this was to be expected really. At speed you still get some air coming though the vents on the dash without the heater motor on.

All in all I am very happy with it, and as an added bonus it looks good too!

Tags
defender heater intake heater matrix How To land rover snow cowl wing
2nd March 2014
0 3,527
Get free Land Rover Blog updates by email
Awesome Land Rover articles and videos straight to your inbox!
We never spam, ever, and you can unsubscribe at anytime!