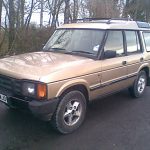 As outlined in my post the other day, i bought my new Discovery 200tdi from Ebay for £600, and have now collected it from it’s previous owner.

So let’s start off with the bad points. For a start it needs a damn good clean inside and out. The Disco is filthy, so the first job is going to be to treat it to a serious clean & polish, both inside & out.

Secondly, it has some bubbling on the paintwork where the steel & aluminium meet, but this is common on all Discoveries of this age, so i wasn’t too fussed about it at this stage. 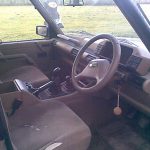 There are a few other minor points, like the engine temperature gauge dosn’t work (probably the sender unit) and the indicator stalk doesn’t self cancel. The indicator light on the dash worked only occasionly, which meant i had to keep checking i hadn’t left an indicator on! The centre cubby box needs replacing, and a new handbrake gaiter is needed too, but most of these things i can live with for the time being, so they didn’t bother me too much.

On the plus side, the Discovery has recently had a new engine and gearbox fitted, (as well as clutch, cambelt & idlers) and the previous owner confirmed that i was carried out around 500 miles ago – so mechanically, it’s good to go.

The majority of the bushes have been changed to polybushes, and from what i could see of the chassis, it seems in good nick. All electric windows work, as do the electric mirrors, and the heater works well too. 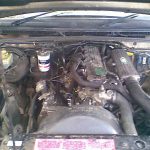 On the drive home, the Discovery performed faultlessly. The recent engine and gearbox change, and the polybushes, mean’s it drives very well for it’s age. The steering is tight, it doesn’t wander around on the motorway, and cruises easily at 70mph.

I will admit to being a little disappointed when i first clapped eyes on it, mainly due to how dirty it was, and the rust on the rear door pillars. But during the hour and a half drive back it started to grow on me, as i thought through the possibilities for the car.

I also tried to concentrate on the plus points of owning a cheap Discovery. The main problem i had with my Discovery 2, was that i was scared of damaging or scratching it when i took it off road – but now with my £600 Discovery, i won’t mind so much if i dent a panel, or scratch a bit of paint.

This means i am now going to be able to get involved a lot more with Torbay 4×4 club, of which i am a member. And as i work my way around the new Disco, it is sure to provide plenty of articles for this website!